Try a different approach to skiing or snowboarding by taking a seat on a snowbike, grabbing the handlebars, and heading out to take a few runs down the slopes or terrain park. Read More

The Legend offers some of the highest skier and rider accessible terrain in North America where half of the mountain sits above the timberline.

Ski and Summer Resort in Summit County CO. Let us help you plan everything from winter sports, summer adventures, dining , events and lodging.

Make Keystone Resort your homebase while in the area. Keystone offers lodging, great skiing, many dining options, and endless summer and winter activities.

Often called skibobbing in Europe, snowbiking (or skibiking) is a relatively new sport to come to popular attention, even though its history started with wooden skis over 150 years ago.  In 1939, MGM even produced a movie called “Ski-Birds” which featured a modern-looking snowbike.

A snowbike is a mix between skiing and bicycling, with handlebars, a banana seat, and two small skis attached to the snowbiker's feet. In the traditional style, it's becoming more popular with people looking for a little less impact in the knees, and a gentler ride. The rider sits on the bike, eliminating the jarring action associated with traditional skiing.

Despite the long history, snowbiking is just starting to pick up momentum. This is, in part, due to the variation called slopecycling, which is a cross between a BMX bike and a snowboard. These allow riders to stand on the back of the board and take their slopecycle down the terrain park. Traditional BMX moves such as backflips, 360's, and manuals all become part of the repertoire available to slopecyclers.

Where to go Snowbiking

Keystone
Leading the snowbiking and slopecycling movement in Summit County, Keystone has rental equipment available to new comers simply looking to try out the sport.

There is a $59 instructional course, lasting two and a half hours, that is required to become certified to ride. After obtaining certification, snowbikes and slopecycles can be rented for $25/day.

Copper Mountain and Arapahoe Basin
Both Copper and Araphaoe Basin allow snowbikes on their slopes and lifts, but they do not offer instruction or rental services.

In addition to Keystone providing rentals of snowbikes and slopecycles, some of the shops also provide them. Snowbikes aren't yet popular, however, which means you may need to ask at a few different shops.

Lift tickets are required for all snowbikes and slopecycles.

As with any new sport, picking up snowbiking will require trial and error. Technique makes a big difference, however, which can be taught be an instructor at one of the mountains.

Currently, Keystone is the only resort to offer instruction, but rental shops in town may also have instructors available. 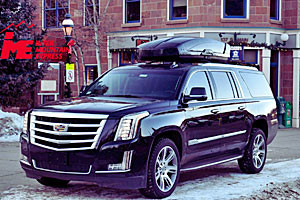