The area around Frisco, Colorado was first occupied by the Ute Indians. The Mountain Men of the American West discovered the area around 1810 when they traveled to the area in search of beaver in the high mountain lakes. The trapping in the area continued until nearly the mid 1840s. Read More

The actual town of Frisco was founded by Henry Recen in 1873 as a result of the mining boom that had started in the area in 1870. By 1882, the population had grown to 250 and the town boasted of having two railroads, many businesses, hotels, saloons and many, many mines. Frisco was at the center of the mining activity because of the railroads and the stagecoach which converged there. Mining continued until 1918.

Frisco was affected by the depression, like must of the United States, but it was able to persevere, although its population had dropped at one point to only 18 people. Thanks to the boom of the skiing industry, the sleepy little town of some 2000-3000 full time residents enjoys popularity with a few tourists during the summer months, but in the winter nearly three million people come into the area. This 120 year old mountain hamlet is surrounded by four of the country's best ski resorts – Copper Mountain, Breckenridge, Keystone, and Arapahoe Basin.

When visiting Frisco, Colorado, you can learn more about the fantastic history of the town by visiting the Frisco Historical Park. There you will find 19th century log cabins which include a chapel, a private residences and even a jailhouse. The Town Museum which is Frisco's old schoolhouse has many displays of Frisco's colorful history of mining, railroads, and pioneers. 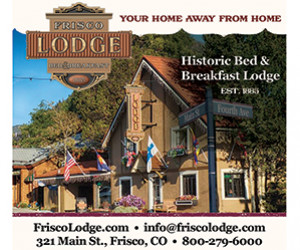 The Frisco Lodge is one of the most historical sites in Frisco, Colorado and the surrounding areas.